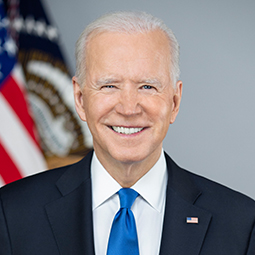 Joe Biden is the 46th President of the United States of America and is a member of the Democratic Party. He represented his home state of Delaware in the United States Senate from 1973 until 2009, when he became the 47th Vice President.

He was born in Scranton, Pennsylvania and later relocated to Claymont, Delaware where he eventually graduated from the University of Delaware as well as Syracuse Law School and served on the New Castle County Council.