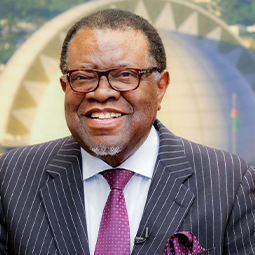 Dr. Hage Gottfried Geingob is the third President of Namibia, in office since 21 March 2015. He is also the President of the ruling SWAPO Party of Namibia.

In 1964, Geingob was appointed South West Africa People Organization (SWAPO) Representative at the United Nations and to the Americas. He remained at the UN until 1989, where he was founding director of the UN Institute for Namibia in Lusaka, Zambia. Subsequently, Dr. Geingob was elected Chairman of the Constituent Assembly that was responsible for drafting the Namibian Constitution.

Geingob served as the first Prime Minister of Namibia from 1990 to 2002, when Namibia gained independence from South Africa. In 2007 and 2012 he was appointed vice-president of SWAPO. He also served as Minister of Trade and Industry. In 2012, he was re-elected as Prime Minister until his presidential victory in 2015.

Geingob is a proponent of partnership in government and advocates for enhanced transparency and accountability in the public service. He is also an ardent believer in the role that the Private Sector should play in economic development, a belief that is encapsulated in the Harambee Prosperity Plan, a Government initiative to accelerate economic development, of which he is the brainchild.