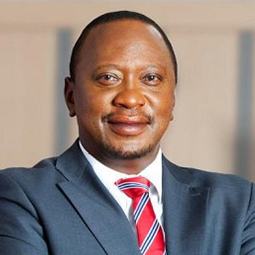 Uhuru Kenyatta was sworn in as the fourth President of Kenya on 9th April 2013, following the victory of the Jubilee alliance he led into the general election of March 2013.

Born on 26th October 1961, he is the son of Mzee Jomo Kenyatta, Kenya’s founding father and first President. He is married to Margaret Kenyatta, Kenya’s First Lady. Together they have three children: Jomo, Ngina and Muhoho Kenyatta.

Uhuru was educated at St Mary’s school in Nairobi and Amherst in Massachusetts, USA, taking a degree in Political Science and Economics from the latter in 1985.

He went into politics in 1997, Between 1999 – 2012 he served in various capacities including as member of Parliament, Minister for Local Government, Leader of the Opposition, Minister for Finance and Deputy Prime Minister.

During his second term in office, President Kenyatta has prioritized four areas of development aimed at accelerating development in Kenya, namely, food security, affordable housing, manufacturing, and affordable healthcare. President Kenyatta’s administration has additionally focused on regional integration and led regional peace and security initiatives, with a special focus on the Horn of Africa.