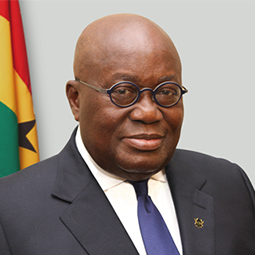 He was first elected as a Member of Parliament (MP) in 1996. As an MP for the then incumbent New Patriotic Party (NPP), Akufo-Addo was made a Cabinet Minister from 2001 to 2007, first as Attorney-General and Minister for Justice and then later as Foreign Minister. As Foreign Minister, he was fully involved in the successful ECOWAS peace efforts in Sierra Leone, Liberia, Ivory Coast and Guinea Bissau, and was chairman of the ECOWAS in 2003.

Akufo-Addo has been a guardian of democracy in Ghana and In 1992, he set up and financed The Statesman newspaper, which has become the unofficial mouthpiece of the NPP. Also in 1995, he led the “Kume Preko” demonstrations of the Alliance For Change (AFC) movement, a broad-based political pressure group. While serving as Attorney General, he worked to repeal the Criminal Libel Law and now as President of Ghana has successfully signed the Right to Information bill which was before the Ghanaian Parliament for two decades.

Akufo-Addo was raised in Accra, Ghana’s capital. He read Economics at the University of Ghana before studying Law in the UK, and was called to the English Bar in July 1971 and the Ghana Bar in 1975.

Nana Addo Dankwa Akufo- Addo is currently a member of the High Level Panel on the Oceans and co-Chairs the 17 member SDGs Eminent Advocates Group.