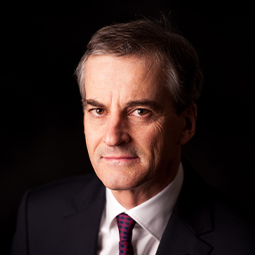 Jonas Gahr Støre was born on 25 August 1960. He is married to Marit Slagsvold and they have three children. Mr Støre underwent naval officer training at the Royal Norwegian Naval Academy in Bergen in 1979–1981. He then studied for a degree in political science, specialising in history and social economics, at the Institut d’études politiques de Paris in France from 1981 to 1985.

In 1989, Mr Støre was employed as Special Adviser at the Office of the Prime Minister, and in 1995, he was appointed Director General of its Department of International Affairs. From 1998 to 2000, he served as Chief of Staff under Gro Harlem Brundtland at the World Health Organization.

Jonas Gahr Støre was Minister of Foreign Affairs in Jens Stoltenberg’s second government from 2005 to 2012, and then Minister of Health and Care Services until the change of government in 2013. Before that, he was State Secretary and Chief of Staff at the Office of the Prime Minister in 2000–2001. He has also held a number of other senior positions in the civil service and humanitarian organisations, including serving as Secretary General of the Norwegian Red Cross from 2003 to 2005.