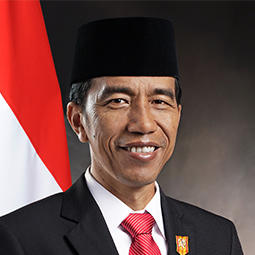 Joko Widodo, also known as Jokowi, is the seventh and current President of Indonesia. He was elected in July 2014 as the first Indonesian president who did not come from a military or elite political background.

A member of the Indonesian Democratic Party of Struggle (PDI-P), Jokowi was elected Mayor of Surakarta in 2005, and was re-elected in 2010 with more than 90% of the vote. In October 2012, Jokowi was elected Governor of Jakarta on an anti-corruption platform. In 2012, he was ranked as the third best mayor in the world by the international City Mayors Foundation.

As President, Jokowi has focused on a nine-point plan that emphasizes helping the poor by clamping down on corruption, improving public services, implementing land reforms, and developing more affordable housing. He has also focused on infrastructure, introducing or restarting long-delayed programmes to build highways, high-speed rail, airports and other facilities to improve connectivity in the Indonesian archipelago.

Jokowi was born and raised in Surakarta and his humble beginnings are well documented. He graduated from Gadjah Mada University in Yogyakarta with a degree in forestry engineering, and worked in a pulp mill before establishing his own furniture factory and becoming a successful furniture exporter.