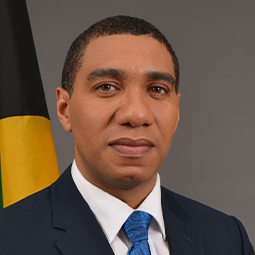 Holness was first elected a Member of Parliament for the Jamaica Labour Party at the age of 25 and is in his fourth consecutive term. Previously, he served as Opposition Spokesperson on Land and Development, Housing, and Education, and as Minister of Education, where he focused on improving literacy in Jamaica and oversaw the introduction of the Career Advancement Programme –a post-secondary technical and vocational training programme for unattached youth. He has retained the Education Portfolio as Prime Minister.

Holness was born in Spanish Town, St Catherine. He gained a BSc in Management Studies and a MSc in Development Studies from the University of the West Indies. Before entering politics, he worked as Executive Director of the Voluntary Organisation for Uplifting Children.