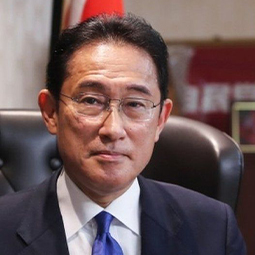 Fumio Kishida was elected as President of the Liberal Democratic Party (LDP) and the 100th Prime Minister of Japan in September and October of 2021, respectively.

Kishida was first elected to the House of Representatives in 1993 as a member of the LDP and has assumed various ministerial roles since.在就任首相之前，岸田曾担任外务大臣和防卫大臣。